Earlier in the summer, I promised readers a narrative on how God suffered with me during one of the toughest times of my life. After spending June and July travelling to see my kids, grandchildren, and working on my hospice manuscript, I am back to my blog. Here is an excerpt from a short story that I wrote in 2006.

In my early fifties, I had a year of one crisis after another: multiple surgeries and medical issues, the death of my mother, the loss of my beloved job, and serious challenges in the lives of my children–I slid into a major clinical depression. It was bad. I really believed that I would never be a competent, fully-functioning human being ever again. I was in a plunge with no bottom. A state of nothingness and total lethargy. Bereft of feeling and emanating emptiness. I could not sleep, but I was too exhausted to stay awake. I paced. It seemed as if my spirit had dried and withered to nothing. I was without a soul. Ultimately, even my usual habits to ease angst–prayer, meditation, and scripture failed me.

Looking back, I believe that the dark void to be the “place” that Jesus Christ descended into for three days after he died. Jesus encountered all situations ahead of us; so I know Jesus had been in this dark, inescapable hole during his lifetime. Apparently, the suffering of Jesus did not conclude with the crucifixion. I know now how much the Triune God loved me. Loves all of us.

Years after my dark night-of-the-soul experience (which lasted for over a year), I was reading a book by Rabbi Harold Kushner and came across this quote: “God is all-powerful, but God’s power does not include the power to control human events; it is the power to enable people to deal with events beyond God’s power to control.” And American Author, Palmer Parker stated in his book Let Your Life Speak: “God’s love for us neither avoids nor invades the soul’s suffering. It is a love that does not ‘fix’ us, but gives us strength by suffering with us.” I admit that the first time that I read those stark conjectures, I was initially disheartened and shocked. But at the same time, deep inside myself, I knew them to be true. At first, it was so hard to reconcile my childhood education about an omnipotent God.

It makes sense both theologically and from my own experiences that the Creator cannot defy the natural law of Free Will; the law that the Godhead designed out of love. And because of our freedom to make choices, we are born into a wounded world. Like Christ’s life on earth, I learned that I too must become spiritually tempered and toughened for my work in this world. And it’s not that suffering is necessarily redemptive in its nature, or that we have a sadistic God or a punitive divine-parent. We do not. However, we must use the lessons of our own suffering to serve others as Christ did and modeled by all of the great prophets of every major religious tradition.

I was baptized into Christ’s life–all of it. Joy and sorrow. Beauty and ugliness. And I have learned that it was only by being dragged kicking and screaming into a solitary ordeal of suffering that I was able to find my true and deepest self and the Triune God within me. It was during that period of embracing the mystery of my depression that I deepened my relationship with God and matured spiritually. Not everyone chooses to reap the benefits of suffering. Instead, many become cynical and embittered.

Author Palmer (who also suffered from depression) asserted: “God wanted me to embrace the descent into hell as a journey toward authentic selfhood and a journey toward God.” Like me, Palmer had always imagined: “God had to be found in the general direction as everything else he valued: UP.” But Palmer had to be forced underground as well before he could understand that the way to the Divine is not always up, but mostly, down. At first.

Franciscan Priest Richard Rohr has a book entitled Falling Upward. Its theology is based on the same premise. It is in hitting bottom and falling to our knees (and remaining there) that we once and for all face our shadows (capital sins). It is in falling, solitude, getting back up, reflection, and then in service to others that we are saved. I believe that the human nature of Christ had to fall first too. (I will write about what I learned about myself in “hell” in my next blog.)

There were no distractions on that black “night.” God and I were eyeball-to-eyeball. Everything laid bare. That year of soul purification was a gift. Often it isn’t until one looks back that the silver lining is revealed. The year of 2005, was the year that my soul was redeemed. That singular year prepared me for the work of birthing souls as a hospice chaplain and writing about the dead and the ills of the hospice industry.

It toughened me. It doused me in humility. It bestowed wisdom and conferred a larger perspective. It softened the edges of my personality. God knew that I needed to undergo exactly what I would be guiding my dying patients to undertake. I would be guiding them to the threshold of no-return and sitting bedside during their own dark nights.

The Latin word for conversion is “conversio” which means “turning around.” “Turning is a common theme in Christian theology.” Christian mystic Hildegard of Bingen (1098-1179) spoke often of “viridites.” She spoke of conversion as a type of “greening of a thing from within.” In other words, “an inner voice calling you to become all that the divine meant for you to be.” And Buddhism called this process “waking up to self.” Christianity also calls it “taking on the mind of Christ.”

I have found only two methods in my life that have brought me to an authentic conversion that was ingrained enough to be long-lasting: my dark night of the soul (a spiritual depression) and taking an Enneagram workshop.

So how did it feel to have God as a like-wise traveler on board during the year of my clinical depression? At first, I felt nothing. That year was a personal gauge on the depth of my faith. One of the major lessons that I learned was that when I stopped begging for relief and recovery of my health (surrendered the entire process to God), I began to slowly heal.

I began to love the Spirit of God not for what She could render me in times of trouble, but I began to love the Triune God as my soul mate. I stopped shopping a list of petitions to God all of the time. I began to unconditionally love God. And God was with me like a parent sitting bedside with a child battling cancer: God cried with me. God tossed and turned in my bed. God wiped my feverish brow and held my hand. God rocked me and sang lullabies. God worked through the amazing professionals who were charged with my care. God never left my side.

Next month: “What did I learn about myself during that dark night?” And more theology on the significance of “conversion.”

How God Suffers With Us
Share This Article
Posted on August 5, 2020March 23, 2022 By Maryclaire TorinusPosted in Nonprofit Hospice ExperienceTagged covid and God, dark night of the soul and mental health, how God suffers with us, suffering and conversion3 Comments on How God Suffers With Us

3 thoughts on “How God Suffers With Us”

Maryclaire Torinus is a hospice chaplain, educator, and speaker on hospice topics. She offers advice to help you make important decisions for your loved one during this difficult time. 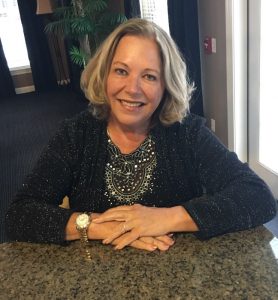